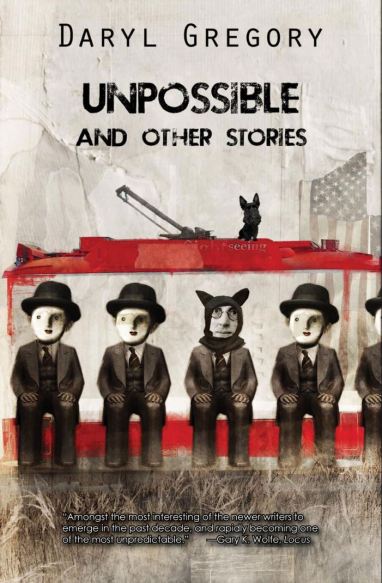 “The Illustrated Biography of Lord Grimm” by Daryl Gregory is the 11th story in The Very Best of the Best edited by Gardner Dozois. It originally appeared in Eclipse 2 but has been reprinted a number of times. You can read or listen to it online at Clarkesworld. Daryl Gregory has published seven novels, numerous short stories, and a handful of comic books/graphic novels. I believe this is the first story I’ve read by Gregory.

The setup of “The Illustrated Biography of Lord Grimm” is quite simple – a small country is attacked by a much larger country. Gregory said he was inspired by the U.S. attacking Iraq. Now picture the United States invading a small country not with stealth fighters but with superheroes. The story opens:

Elena is our point-of-view character from which we see her city destroyed and watch citizens struggles to survive the aftermath. It’s a clever anti-war story that makes me feel for these imaginary foreign people. Trovenia is characterized like a cold war era eastern bloc country. Its citizens parrot the standard propaganda against America yet distrust their own leaders. America uses its superhero power advantage to bully smaller nations, while Trovenia’s leader, Lord Grimm, brags of having equal superpowers to fight back.

This story is not my kind of story because I’m bored to blazes with superheroes and their superpowers, but I imagine fans who love the DC/Marvel universes will be entertained.

Science fiction and fantasy writers face a constant challenge of competing with the successes of movie franchises that make billions dominating the pop culture landscape. Our society has reached the science fiction saturation point decades ago, so it’s hard to come up with anything new that will dissolve into our Pop Culture Kool-Aid.

I feel sorry for struggling young writers. I’d like to think this story is also Gregory’s way of responding to superhero oppression. Even though “The Illustrated Biography of Lord Grimm” isn’t my kind of story, I still found it enjoyable, and maybe I did so because the superheroes are portrayed like V-1 and V-2 bombs rocketing over London during WWII – powerful caped menaces streaking across the skies terrifying ordinary people.

There are whole armies of talented writers out there hoping to get noticed. Their only weapon is typing out words, but those black pixels on white backlights must compete with 3D Imax blockbusters. Even though I have some problems with the stories in Love, Death + Robots, I’m still excited to see science fiction writers getting their short stories produced for the HDTV screen. “The Illustrated Biography of Lord Grimm” could make a visually stylish short film.

And that might be another reason why Gregory features superheroes in his story – he imagined it being filmed as he wrote it.