The word “mediocre” usually presents a negative connotation. But the word can mean ordinary, average, middle-of-the-road which if you think about it, is true for most things in our lives. Not everything in life can be exceptional. Statistically, most aspects must be run-of-mill common. We don’t like to believe this, but most of us lead mediocre lives. We wish our time on Earth could be as important as a classic novel, but we’re goddamn lucky if we can say we’ve had a good average life.

This essay was originally going to be called “Favorite Science Fiction Stories Volumes 1-10 Table of Contents.” I love Audible.com, but it often annoys me by selling anthologies without listing their individual entries. I recently stumbled upon this series and thought I’d provide a public service by listing the contents of all ten volumes. I was hesitant to even try these audiobooks because the so few stories I saw listed were famous.

I couldn’t find much about the publisher, Jimcin. It’s web page merely states its products are for sale at Audible.com, although these anthologies are also listed at Amazon and iTunes. They appear to be collections of out-of-copyright stories, which means they are older than the 1920’s or the authors or author’s heirs never bothered to renew the original copyright. In other words, they might be the dregs of the genre. The ten volumes do contain a few big-name-authors, and a handful of classic science fiction stories like “The Machine Stops” by E. M. Forster, “The Martian Odyssey” by Stanley G. Weinbaum, and “Scanners Live in Vain” by Cordwainer Smith. Those three stories also appear in the legendary Science Fiction Hall of Fame anthology series which came out in audio this past year. But for the most part, these stories were the common, run-of-the-mill stories that filled the science fiction digests in the 1950’s and 1960’s.

There’s a certain fun quality to science fiction that doesn’t require literary greatness. In the middle of last century, hack writers churned out Sci-Fi tales to survive. Many of them could hammer out a story in a few days that could both excite geeky fans and pay the rent. All they had to do was come up with an idea that 12-year-old know-it-alls had never encountered. Hardcore science fiction lovers thought of themselves as Slans but often blowing their minds only took one hit on the science fiction bong.

I avoided buying these Jimcin anthologies for years because I thought they’d be crappy, but then four volumes went on sale and I took a chance. I’ve been pleasantly surprised. Yes, they are mediocre, but they also have a unique entertainment quality. Just my kind of fun. If you love episodes of the old Twilight Zone TV series, there’s a good chance you’ll enjoy these stories too.

I crave science fiction short stories on audio. Somehow, short stories come alive for me when I listen, especially when they’re read by a narrator who adds dramatic voices. Oh, I still love to read, but I admit I’m a poor reader compared to these hired guns. It’s the narrators who add the extra dimension. And these ten volumes are a time capsule of what it’s like to have been a kid back in the 1950’s and 1960’s who loved science fiction.

My goal here is to promote more audio productions of short science fiction. I need to get more people buying audiobook science fiction anthologies so publishers will feel the demand and publish more of them. Most of you will not rush out and buy one of these Favorite Science Fiction Stories anthologies, especially after I called them mediocre, but I wanted to be as honest as possible.

I’m going to list the table of contents to all ten volumes and provide links to some of the stories I’ve found on YouTube, so you can hear what I’m talking about. These are public domain stories you can find online for free, especially at places like Project Gutenberg and YouTube. I don’t think the audio versions below are the same as the ones in the anthologies, but I’ve only tested a handful of stories. I’m not trying to ruin Jimcin’s sales but promote them. It’s far more convenient to listen to them on your smartphone than to listen to them on YouTube. But try a few to see why you should buy a whole anthology.

There are many public domain science fiction stories in audio available on the web. Often, they are from LibriVox, which use volunteer readers. LibriVox readers are good and provide a great public service, but they don’t usually provide the kind of dramatic narration I’m talking about. The stories I link to below have at least a basic level of professionalism, and some of them are excellent. I don’t know if these recordings are from copyrighted productions or if they’re productions by would-be audiobook narrators hoping to prove they can be professional.

My goal is to promote audio productions of short science fiction by expanding the audience. I want to see more anthologies of older science fiction for sale. Try some of these audio short stories to see if you get hooked, and if you do, then try one of the anthologies. 1 credit or $7-$10 is not that much for 15-20 hours of entertainment.

If you want to know more about audio science fiction, check out SFFAudio.com. They track and review both print and audio productions of public domain genre stories, as well as review professional productions of new and old stories.

I’ve bought 5 of the 10 volumes so far – see *. I’m getting a big kick out of listening to these stories. Yes, they are mediocre, but they capture a certain science fictional flavor from mid-20th-century. Be sure and read “The History of Science Fiction, and Why it Matters” by Allen Steele in the Nov-Dec 2018 issue of Asimov’s Science Fiction which just came out. Steele wonderfully explains why it’s important to read old science fiction.

Prices listed are from Amazon. Audible members might get a discount. These Favorite Sci-Fi Stories have been around for a decade, but I don’t know if they get much attention. These anthologies are not listed in ISFDB.org as far as I can tell. I wish they were. I’ve published this list of contents because I had a hard time finding this information. 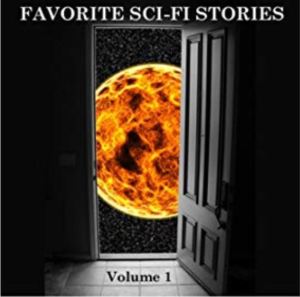 5 thoughts on “In Praise of Mediocre Science Fiction”