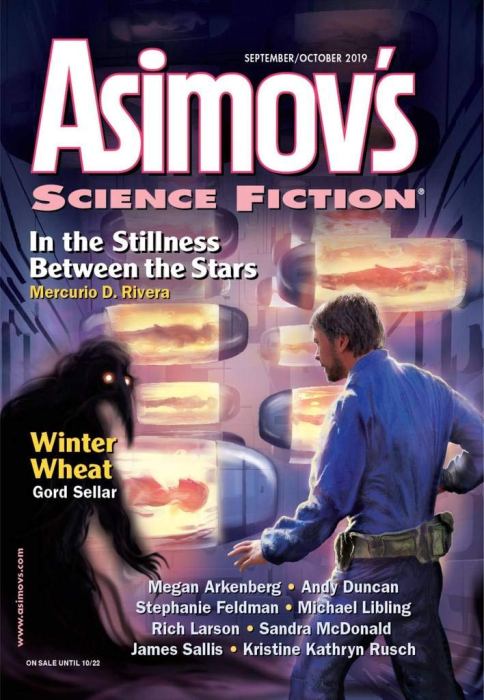 Mike, the guy who does the computer programming for this site, and I often talk about science fiction short stories. We both subscribe to Analog, Asimov’s, and F&SF. Whenever one of us reads a story we like we tell the other to give it a try. To be honest, we don’t often find stories we really like, but when we do, we often like the same story. What’s rather fascinating when discovering a story you really love is assuming everyone will love it too, and discovering they don’t.

“Then, When” by Eric Del Carlo from Sept/Oct issue of Asimov’s Science Fiction was a big hit with both Mike and myself. I thought the story had a very clever science-fictional invention and Eri Del Carlo created a very moving story to showcase that idea. I thought the story so good that I wondered why it wasn’t the cover story, however, Carlo didn’t even get his name on the cover with the other authors.

Looking around the web “Then, When” is getting mixed reviews. Rocket Stack Rank called it an “Honorable Mention” but dinged the idea I thought so clever as being “pretty gross.” That made me consider the appeal I have to the idea. Sam Tomaino at SFRevue said “Really interesting idea and a great story.” Michelle Ristuccia over at Tangent Online  said, “Carlo expertly weaves Barrett’s first-person narrative to breathe new life into themes of self-actuation and introspection, bringing these existential questions down from the hypothetical heights of cloning and AIs to the personal connection of everyday decisions and our ability to redirect our own personal growth.”

I love science fiction stories that have a cool imaginary invention in them. Eric Del Carlo imagines a fad in the future where a computer program can make a “mirror” of a person by observing their behavior. Think of a cross between Amazon’s Alexa and a deep fake video of yourself that talks and acts just like you on a computer or TV screen. In Carlo’s future, these mirrors have gone out of fashion. When Barrett, the main character, finds out his ex-girlfriend illegally made a mirror of him while they were together he’s annoyed. She kept it for companionship. Barrett at first thinks he will sell his mirror to a marketing research group but then decides to keep it. Of course, he is embarrassed to own what popular culture has decided is a narcissistic toy. This is probably why Greg Hullender thought it was a gross idea too. But I’m not so sure.

Wouldn’t hanging out with ourselves be enlightening? It’s very hard to know our own virtue and flaws. I’d probably be horrified talking to myself. I know if I had to listen to me make the stupid jokes my wife complains about I’d probably stop. Maybe I’d even learn how to pronounce all the words I stumble over. I’m a rather quiet person, so I’m not sure how much a mirror could learn from just watching me. Of course, if it read my blogs it would become a rather verbose bastard. If I had to listen to all the ideas I like to write about would I bore the crap out of myself?

What I really liked about the idea of mirrors is they are more realistic than mind downloading/uploading, which is a very popular concept in science fiction right now. I believe our minds are tightly integrated with our bodies and far too complex to ever be recorded. The idea of mind uploading is about as silly to me as when E. E. “Doc” Smith had his characters hurling galaxies at each other. But I can imagine an AI program studying people and imitating them so well that their speech and opinions would be very close to the original.

In the story, “Then, When” we are told that scientists don’t think the mirrors are sentient, but the ending leaves us thinking they might be. But like the mirror said, does it really matter if we can fool you into thinking we are?

Carlo comes up with a very nice emotional story where Barrett grows and changes by communicating with his mirror. However, I think the idea of mirrors is so good that I can imagine it catching on and other science fiction writers using the idea. Like I said, I think mirrors are a much better idea than mind-uploading and it seems zillions of stories are being written about that. Since reading, “Then, When” I’ve thought about a couple of ideas for stories using the concept of mirrors.

Think about how popular self-help books are today. Wouldn’t mirrors be instant feedback to how well a self-help book is working? Say, you’re a professor and you watch your mirror lecture would it inspire you to become a better lecturer? Or would people with low self-esteem be bummed out by their mirrors?

Brian Aldiss invented something similar to a mirror for his 1976 story “Appearance of Life.” In his far future people can create memory cubes to give to other people like letters. In the story, a man finds two memory cubes from a divorced couple who hadn’t seen each other in years. Both wanted to get back together. He set the memory cubes next to each other so they talked back and forth within the limits of their recorded ability. After a while, each began to subtly repeat itself in their expressions of regret, love, and memories.

I believe if we had mirrors we might all find that our personalities are rather shallow. I don’t think there’s that much mind to upload. Our personalities are really mirrors of culture, and mainly a collection of likes and dislikes. We don’t do that much original thinking. Really, what we are, is a sentient bubble of consciousness that reacts to our bodily experiences, the environment, and culture.

Couldn’t a mirror become a microscope that lets us look into our soul? Would we agree with ourselves? Or would a mirror help us spot our dumbass behaviors and beliefs? I am reminded of a Bob Dylan song, “Positively 4th Street” and its last refrain:

I wonder if Dylan ever imagined seeing himself.

One thought on ““Then, When” by Eric Del Carlo”