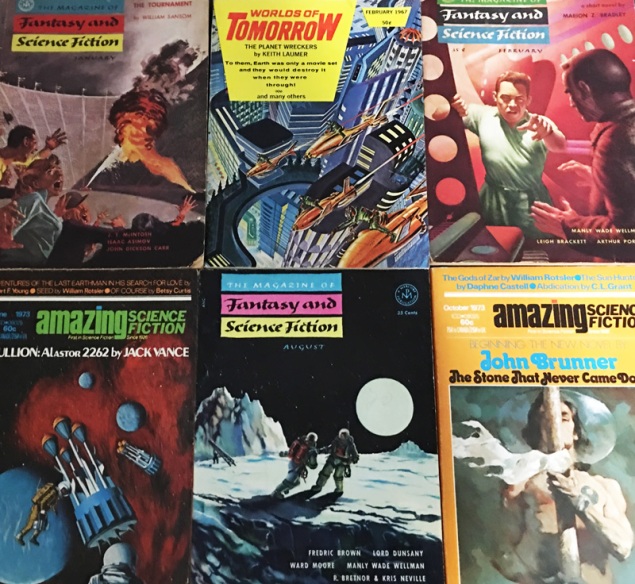 This year Galactic Journey is up for the Hugo Award for Best Fanzine.  The website is subtitled: “55 Years Ago: Science Fact and Fiction” which explains the clever idea on which the site is based. Founder, Gideon Marcus, traveled fifty-five years back in time when he began his blog and reviews the science fiction of that era. Mostly he reviews science fiction magazines as they come out, but also discusses SF movies, TV shows, and some books, along with science news of interest to science fiction readers. His journey began in 2013 when he jumped back to 1958, just a year after Sputnik was launched, but he’s now up to reporting on 1964, which includes a review of the latest issue of New Worlds.

Over the years I’ve read Galactic Journey erratically. I subscribe via RSS feed, and when a new post shows up I would read it if I had time. However, during this past year, I’ve slowly switched to old science fiction magazines as my favorite SF reading. It’s become my favorite form of escapism. I’ve even customized my iPad to read Galactic Journey. Weeks ago I jumped back to the beginning of Galactic Journey and began to read forward. I always keep the site open in my Chrome browser. I also keep my CBR reader active, so when I read a positive review of a story, I download the magazine in my CBR app and read the story right away. I used to keep a list of stories I wanted to read someday. Reading the story immediately has made a big difference in enjoying Galactic Journey.

You see, I have a vast collection of old science fiction magazines in digital format making this possible. In recent years fans of old magazines began scanning them to preserve and share. This began as a somewhat secret activity because it violates copyright law, but it’s now pretty much out in the open. I’m not sure if anyone really cares about old magazines to worry about their copyright. There are probably a few dozen scanners who want to preserve the decaying pulps for digital libraries, and maybe two or three hundred old readers who fondly remember these magazines. This is an exceedingly small subculture who love an incredibly tiny aspect of past pop culture.

The Internet Archive which is backed by a California library system has become the leading special collections library of old pulps and digests. See their Pulp Magazine Archive. Other sites around the net offer digital scans of old SF magazines for downloading too. Each issue is about 75-150mb on average in CBR format and 10-20mb in pdf format, so they are time-consuming to download and take up a lot of space on your hard drive.  On eBay, you can buy complete runs of a classic SF magazine on DVD for a few dollars which can save a lot of tedious downloading work. Internet Archive has an online viewer that makes casual reading easy. PulpLibrary.com also has an online viewer that is very visually appealing, but they far fewer issues.

Because these old magazines have become available, whole magazine issues are being reviewed like at Galactic Journey. Other reviewers include Rich Horton at Black Gate, Paul Fraser at SF Magazines, and a few other sites with less regularity. Paul Fraser has a handy Reviews Index by magazine title with links to reviews of individual issues from almost four dozen SF/F magazine titles.

I subscribe and read many of the current SF magazines, while also systematically reading through all the annual best-SF-of-the-year collections, as well as anthologies that cover the complete history of science fiction. What I’m discovering while gorging on all this short fiction is I tend to like science fiction best from the 1950s and 1960s. Galactic Journey has pulled me back into the past, and it has reached a point in time so that it’s now reviewing the SF magazines I read when I was growing up.

And I’m not sure if my preference for old science fiction is pure nostalgia. I just finished reading The Very Best of the Best edited by Gardner Dozois that claimed to be the 38 finest short science fiction stories published from 2002-2017. On average, I’d say these modern stories were more sophisticated and better written than SF stories from the 1950s, but I wouldn’t say they were more fun to read. The modern stories were more scientific and politically correct, but they offer far fewer settings in which I’d want to vicariously dwell.

Sadly, the future has changed during my lifetime. Maybe its a bit pathetic to jump back in time to read old science fiction magazines. Maybe it even reveals a psychological problem. But I find a distinct pleasure in reading these old science fiction mags at this stage in my life. I’m now reliving the 1960s in my sixties, and soon I’ll be reliving the 1970s in my seventies. A philosopher once said an unexamined life isn’t worth living. I think we also need to reexamine our futures too.