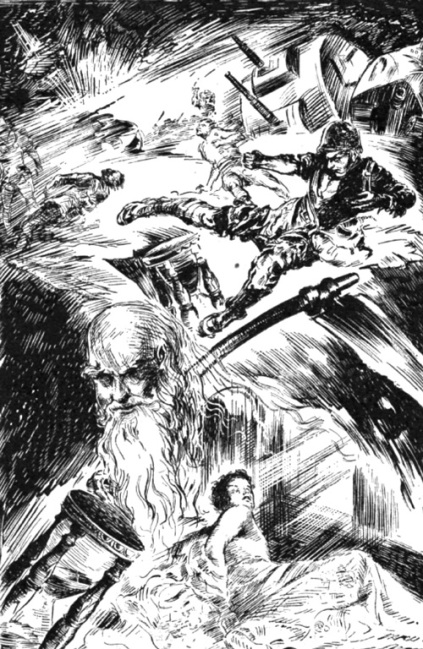 Have you ever thought of an idea for a science fiction story, but before you could use it discovered the idea has already been used in another story? Last night I read “Time and Time Again” by H. Beam Piper and it uses an idea I’ve already tried in several story attempts. The idea is not really science fiction, but a fantasy version of “if I knew then what I know now,” but Piper throws in some pseudo-science gobbledygook and tries to pass it off as science fiction. Of course, in 1947, science fiction writers were ramping up for the 1950s, the SF Decade of Psi-Powers.

“Time and Time Again” originally appeared in the April 1947 issue of Astounding Science Fiction. It was reprinted in the classic retrospective anthology, A Treasury of Science Fiction edited by Groff Conklin in 1948. In 1956 it was made into an episode of X-Minus One radio show. I read just it in The Great SF Stories 9 (1947) edited by Isaac Asimov and Martin H. Greenberg. The story is also available at Project Gutenberg. This was H. Beam Piper’s first published story.

Reading science fiction magazines reveals that most stories aren’t that good. They’re good enough to get published, but most won’t make it into the best-of-last-year anthologies the following year. I’m reading a best-of-1947 volume, which contains these stories:

Time has not been kind of science fiction. Only the very well-read in science fiction will know any of these titles. “E for Effort” and “With Folded Hands…” made it into volume 2 of The Science Fiction Hall of Fame. “Little Lost Robot” became part of I, Robot. And “Thunder and Roses” is one of Theodore Sturgeon’s most famous tales. I doubt many science fiction fans born after 1990 will know these stories.

“Time and Time Again” uses an idea that’s a daydreaming fantasy of mine and one that I’ve tried to work into a story several times. (I did use a variation of it for my blog, “I Wish I Had A Time Machine To Save My Dad.”) Allan Hartley, age 43, dies and wakes back up in his 13-year-old body, but remembers everything that will happen to him for the next thirty years. Replay (1986) by Ken Grimwood was the first work I read that used this idea of reincarnating into one’s own life.

Is “Time and Time Again” a good story? In the July 1947 issue of Astounding Science Fiction, “Time and Time Again” came in 1st in The Analytical Laboratory with a score of 3.11 out of 5 stories. Readers rank stories so a score of 1.0 would have meant every reader would have placed it first on their list. A score of 3.11 means it wasn’t a standout. “Time and Time Again” was good enough to get into Conklin’s big anthology, get produced as a radio show, and to be picked as one of the best SF stories of 1947 by Asimov and Greenberg. But on the whole, it’s not that good. Well, yes and no. If you have a fondness for 1940s science fiction, it has its charms, but if you read with a critical eye, the story is not that polished.

“Time and Time Again” did excite me, but only because it uses my pet idea. Have you ever fantasized about reincarnating into your younger self so you could relive your life knowing what you know now? Sometimes a far-out idea is all a story needs to make it likable. However, Piper really didn’t use the idea effectively, essentially throwing it away on a clunky plot. That’s one of the big faults of science fiction. Writers come up with a cool concept, but often cobble together any old plot to showcase their spiffy insight.

“Time and Time Again” is the earliest version of this theme that I know, and H. Beam Piper does come up with many of the same consequences that later writers have:

Ken Grimwood covers all of this in the first replay of Jeff Winston’s life. Strangely, Winston dies at 43 too. Could that have been a homage to Piper? Actually, Piper’s ending does have other parallels to Replay. Where Grimwood gets brilliant is when he has Winston relive his life over and over again, each time feeling the need to do something different. Knowing the other possibilities that Grimwood explores made me feel less impressed with Piper’s story. And I guess that’s not fair – it might be the first to use this idea.

I wish someone would create an anthology of stories using this theme. I don’t know of any short stories that use this specific idea, but I bet they’re out there. If you know of any, please leave a comment.

Piper starts the story off by showing what happens to Allan, but eventually, he just has Allan lecturing and speculating. It’s a shame he couldn’t have come up with a fully dramatized plot.

Within “Time and Time Again” Allan mentions a 1923 fantasy novel, The High Place, by James Branch Campbell, and says the idea was also in Jurgen by the same author. But I don’t know what the specific idea he’s referring to. Allan also says Dunne’s Experiment With Time explores precognition. So I don’t know if Piper is more concerned with precognition and less with reincarnation into one’s own life. Piper could have used Allan Hartley wake up in his 13-year-old body just to give us a reason for his precognition, and not as a life do-over tale.

This story was written just after Hiroshima, and already science fiction is attributing magical events to atomic explosions. In the years to come, A-bombs would produce countless mutants with superpowers and portals to other dimensions.

Hartley wants to change history. That seems egotistical to me. It also seems comic bookish and juvenile too. Why would the universe give us a chance to relive our life? At a spiritual level, taking it beyond science and science fiction, wouldn’t such an opportunity be telling us to do a better job this time around and change ourselves, not the world? One common trend in science fiction from this era is the power fantasy, where one hero can save the world, solar, system, galaxy or universe. I think H. Beam Piper matured as a writer by the time he wrote his masterpiece, Little Fuzzy.

3 thoughts on ““Time and Time Again” by H. Beam Piper”