Can readers guess how a story was plotted as they are reading it? Was the writer a pantser or a  plotter? Did the writer just sit down and start writing by the seat of their pants, or did they carefully work out the whole plot ahead of time, maybe in an outline, software, or just in their heads? Would be writers often argue over whether its better to be a pantser or a plotter — to let a muse whisper in your ear or work out the details in advance with logical precision.

My guess is most science fiction writers come up with a science fictional idea first, and then invent characters, setting, plot to showcase that idea. Quite often it feels like some writers get an idea, sit down and start writing towards presenting the idea fictionally, inventing everything needed on the go to get to a situation the presents the idea. Unfortunately, this often shows as lame characters, speaking crappy dialog, following mundane events which gives an overall impression of haste. This is fine for a first draft. A final draft should feel like everything in the story was there for a creative purpose. Personally, if I spot the seams, I feel I’m reading something too close to the seat of the pants draft. If a story feels polished I assume everything was carefully thought out and sculpted. However, I don’t know if my reading sixth-sense is accurate. 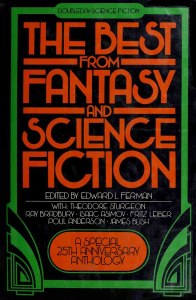 An example of my thought tracks comes from just reading “Midsummer Century” by James Blish. The story  first appeared in the April 1972 issue of The Magazine of Fantasy and Science Fiction, but I read it in The Best From Fantasy and Science Fiction: A Special 25th Anniversary Anthology edited by Edward L. Ferman. This anthology had six stories from special issues devoted to Theodore Sturgeon, Ray Bradbury, Isaac Asimov, Fritz Leiber, Poul Anderson, and James Blish. Besides a story, each author was given a short biography and bibliography. With such special fuss, you’d think the stories would have been an exceptional work. “Ship of Shadows” by Lieber and “The Queen of Air and Darkness” by Anderson were award-winning stories, quite ambitious, and impressive. Four of them were not.

Those four had various problems, and as I read them, I wondered how they were conceived. The Sturgeon felt like the beginning of a novel that had been abandoned, and then hastily fixed up for the F&SF editors. The Asimov felt like it had started out as one kind of story, hit a wall, set aside, and then fixed up with a trick solution. The Bradbury felt like Bradbury hadn’t written any SF in a while and was riffing on one of his old standard science fiction melodies — but he was out of practice. I really liked the start of both the Sturgeon and Asimov. They had been chugging along fine on inspiration but then ran out of steam. All three felt like they had been plotted on the go. The Lieber felt like another seat of the pants creation, but it worked. However, Leiber didn’t stick the ending. The Anderson felt like it was holistically conceived, but who knows, he could have written it scene by scene out of his unconscious. 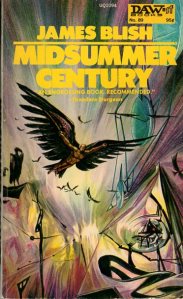 The last story, “Midsummer Century” is the most interesting in trying to figure out how and why Blish wrote it. It’s so episodic that it really feels like he was flying by whatever ignited his mind during five long writing sessions, each time feeling a different kind of inspiration, each fascinated by a different far-out idea.

The story begins with radio astronomer John Martels moving from England to the United States. Blish uses this part to natter about the class system in England and the lack of one in America, despite the fact that Americans do oppress certain ethnic groups. This section ends with Martels repairing a radio telescope and falling to his apparent death. What a reading shock because I was all prepared to enjoy a story about a British astronomer working in America. Evidently, Blish got bored with that.

Next, we find Martels 25,000 years in the future cohabiting a computer with an immortal being named Qvant. I know it was quite common in the 19th-century to come up with innovative ways of getting your character into the future, but did Blish really expect us to believe that dying inside a radio telescope dish would project a soul ahead in time? It definitely was an odd way to solve a cliffhanger, but I went with the flow.

Blish then spends some time describing what reincarnated life in a future computer is like, with no bodily senses other than a security camera monitoring a decaying room in a far future museum. It turns out Qvant was created by the third form of humanity, reminding me of Last and First Men by Olaf Stapledon. Qvant has become an oracle god to the fourth form of humanity, who appears as naked savages but are quite noble, leading clean and tidy lives within a hothouse jungle that has taken over the entire Earth.

In this portion of the story, Blish seems interested in exploring reincarnation, and Zen meditative states, as well as new forms of communication. Qvant advises the primitives to solve their problems with rituals and dances which he tells Martels really do work. Blish was well known in the SF genre as a polymath, and here he tries to imagine an advanced non-technological society. This section is the longest part of the story, allowing Blish to work out several science-fictional ideas, but I can’t help but believe, most were on the fantasy end of the spectrum.

When I started wondering where Blish was going next with his story, he evidently, was wondering the same thing. Martels’ mind jumps into a human named Tlam. By now, I’m starting to wonder if Blish isn’t writing a picaresque, rather than a modern plotted story. At this point, it felt like Blish had written himself into a corner used this turn of events as a quick way to escape. That writing day, he obviously felt more interested in the primitive people and their society. Martels rides along in Tlam’s head observing the ways of the fourth form of humanity.

Blish doesn’t stick with this story angle for long. By now, it felt like he had decided on an ending, and wanted to get Martels there. But first, he needed Martels to visit the kingdom of the birds. Evolved birds were brought up in the second section, and I assumed Blish wanted to play with that idea for a while.

We knew from the second section that fourth-stage humans were competing with birds for dominance of the planet. The birds wanted to wipe out humanity and were succeeding. In this portion of the story, I wanted to find out more about our avian rivals, but Blish presents few ideas about bird civilization, not nearly enough for me. Tlam/Martels is captured by birds and taken to a skyscraper of wood and leather built by the bird civilization. Martels/Tham gets to meet the bird king, but nothing really happens.

Almost abruptly Blish decides its time for Tlam/Martels to escape and comes up with another cliffhanger escape, one with a fair amount of action and wonder, but one that felt rushed and somewhat half-hearted.

Finally, we reach the last section of the story, set in Antarctica, where a few third stage humans cling to existence allied with another powerful computer, the one Qvant wants to use to regain power. We only learn late in the last section that Qvant has been traveling along with Martels inside Tlam’s head, but Martels makes it inside the computer first, frustrating Qvant. This final section gives Blish an opportunity to explore telepathy, which almost feels like it was his original goal for the story. Much of the story is about the transmigration of human and machine souls and telepathy. After he explores those ideas, Blish tacks on a happy ending and quits.

I don’t know if the novella “Midsummer Century” was expanded when published as a 106-page hardback book. ISFDB calls it a chapbook. I’m tempted to get it to see if Blish rewrote and expanded the story. However, I’m hesitant because I’m afraid he didn’t.

The science fiction in this story felt like something out of the 1930s or 1940s, maybe inspired by The Time Machine, or Campbell’s “Twilight” or even Stapledon’s stories. Blish wanted us to think about the far future and what we might evolve into. And that’s a cool SF theme I love. Getting Martels into this future is rather clunky. Does the story really need a man from the past? Couldn’t it just have been about the third and fourth stage humans and the birds?

“Midsummer Century” is full of fascinating concepts, but the plotting is haphazard. It makes me wonder how budding writers could even consider pantsing practical. I imagine any story written entirely from daily inspiration should be rewritten thoroughly after a careful analysis. Science fiction writers often have to make a living by pounding out the pages, and not every unconscious mind is working behind the conscious mind of the writer to guide the plot so every scene tightly integrates with the whole. I assume some writers might have such a superpower for plotting on the go, but doubt many.

I love science fiction for its ideas, but just throwing out a series of marvelous musings doesn’t make for storytelling. Thinking about it now, I’m not sure if I’ve ever read a science fiction novel set in the far future that was thematically holistic in its construction. I think the theme inclines writers to spit-ball the concepts. I need to reread Hothouse by Brian Aldiss, it might have been more artistic, but I can’t remember.

On the other hand, “The Queen of Air and Darkness” by Poul Anderson felt like it was designed like a three-dimensional wooden puzzle. And that might explain why it won the Hugo, Nebula, and Locus awards. 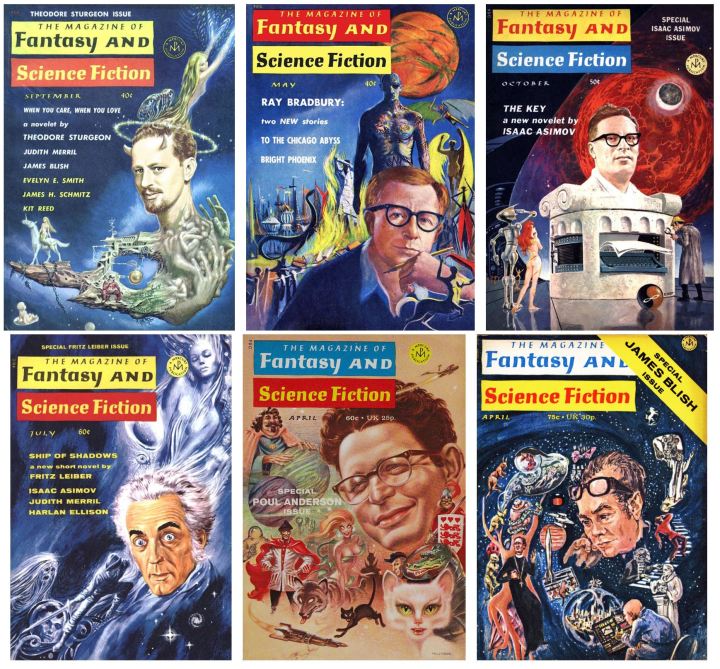 7 thoughts on “Pantsers vs. Plotters”