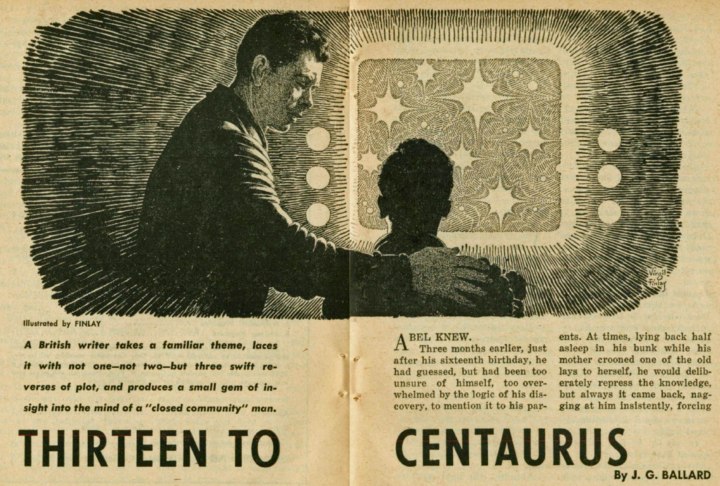 “Thirteen to Centaurus” by J. G. Ballard is the fifth story in the Generation Ships in Science Fiction discussion originated by Joachim Boaz. You can read the story online here. I consider “Thirteen to Centaurus” a superior story. However, none of the generation ship stories we’ve read so far have been popularly anthologized, so they aren’t classics. Maybe it’s time to reconsider that.

I don’t want to say much about “Thirteen to Centaurus” since I don’t want to spoil any of its several plot twists and turns. However, in my previous reviews in this series, I mentioned an idea I had for a generation ship story, and it turns out Ballard already used it back in 1962. Of course, I wouldn’t have developed the idea the same way Ballard did. It does make me wonder if science fiction writers should read all the major stories from a theme before trying to take on a theme? On the other hand, if the average reader isn’t well-read in a theme, does it matter?

I want to believe that J. G. Ballard had read “Lungfish” by John Brunner when writing “Thirteen to Centaurus” because there is a certain synergy between them. The two stand out of the five stories we’ve read. Ballard and Brunner began their science fiction careers in Great Britain in the 1950s. Ballard was being published in New Worlds around the time of “Lungfish” so he probably read Science Fantasy too. I’m not so sure Ballard would have read the Judith Merril, Chad Oliver, or Clifford Simak stories in the American SF magazines, but “Thirteen to Centaurus” seems to reply to them. I have to assume there is a progression of logic when thinking about the consequences of humans living on a generation ship and all the writers are reaching the same or similar conclusions.

So far these SF writers believe humans can’t handle a generation ship mission psychologically. Is that why we mostly read about FTL travel? Several writers have suggested we’ll need to condition or even brainwash the generation ship crew. And all the stories have had an element of conspiracy in them, that for one reason or another the crews don’t know everything. More than one story worries that the ship born generations, the ones who didn’t volunteer for the mission will feel resentment or rebel against the mission. Would you be pissed in such a situation?

I’m hoping to see in future reads a sense of progression past these fears. I’d like to see positive stories about how humans adapt and even create new philosophies, perspectives, and hopes while living on a generation ship mission.

We’ve seen two kinds of story problems so far. First, the writers imagine the kinds of problems crews might encounter on real generation ship missions. Second, writers have imagined problems for the crews to make interesting plots. Before reading these stories I never considered the psychological problems generation ship crew would face. Now that I have, I can see a whole array of further speculation along those lines. Has Philip K. Dick ever written a generation ship story? PKD could have done some weird shit with this idea.

And there are all kinds of considerations the writers haven’t explored. The other day while brushing my teeth I wondered how many toothbrushes and tubes of toothpaste must be stored on a generation ship for a mission that will last a hundred years. If a ship has 1,000 passengers, that’s a lot of toothbrushes. Or do they send along a factory that can make them? It’s certainly helped that we’ve developed 3D printers since these stories were written. But really, how do you equip a voyage for a century or millennia?

If the voyage begins with 1,000 crew members and they start having kids, grandkids, and great-grandkids, how many sleeping births will be needed? It sounds like a kind of algebra problem, doesn’t it?

None of the stories we’ve read so far had the ship stay in communication with Earth. Is it possible to have radio contact with Earth on a spaceship moving at one-tenth the speed of light? If a one-minute radio message is sent from Earth, how long does it take to record it at relativistic speeds on the ship? Heinlein created a wonderful setup in Time for the Stars with telepathic twins, one staying home and one leaving. If telepathy was possible, how does relativity effect it?

If a generation ship had a large telescope could it be networked with those on Earth or in the solar system to create a really large interferometer? If so, how much detail will we be able to observe in destination solar systems? In these early generation ship stories, the crews travel blindly to other systems hoping to find habitable planets. Knowing what we do about exoplanets and with telescope development, would that ever be true of real generation ship missions? Haven’t we passed the point where the 1940s, 1950s, and 1960s story problems wouldn’t exist? I’m really looking forward to generation ship stories from the 1970s, 1980s, 1990s, and so on.

Can we create a generation ship that won’t bring along most of the diseases that plague us on Earth? And if the crew does carry on colds or strains of flu, will they die out because the passengers all develop immunity, or will they mutate in such a small population? What happens to a generation ship crew if they encounter diseases at their destination?

I wonder what shipboard novelists would write about. What if they try to write about life on Earth without ever living on Earth. Can the ship born ever develop a realistic picture of life on a planet from movies and books? What kind of myths will they have about us?

Once we start thinking about the possibilities they are endless. So far, I think the stories we’ve read have been very good but limited in their speculation and imaginations. I’m looking forward to reading more.

I’m surprised that we don’t see more generation ship stories. I guess writers want FTL travel because they want a bunch of interstellar action. In Star Wars they can obviously travel between star systems faster than needing to pee because some of the Star Wars spaceships aren’t large enough for bathrooms. Basically, modern science fiction has made FTL spaceships the new fantasy portal, but they are no more realistic than the wardrobe in the C. S. Lewis stories.

Interstellar travel is probably impossible, but our best chance will be generation ships. I’m surprised we don’t see more of them in science fiction.

Remember, here’s the list of the posts in this discussion so far. Joachim Boaz at Science Fiction and Other Suspect Ruminations leads the group. He will announce the next story.

5 thoughts on ““Thirteen to Centaurus” by J. G. Ballard”