One in Three Hundred by J. T. McIntosh is a fix-up novel that was published in hardback in 1954 but was first serialized as three stories in The Magazine of Fantasy & Science Fiction (Feb 1953, Jan 1954, Sep 1954). That was quite common back in the 1950s, to assemble a novel from a series of shorter works written first for the magazines. For example, Foundation, More Than Human, A Case of Conscience, A Canticle for Leibowitz, etc. were all fix-up novels.

I had discovered the novelette “One in Three Hundred,” in The Best Science-Fiction Stories: 1954 edited by Everett F. Bleiler and T. E. Dikty. I thought it a ripping tale and immediately looked it up on ISFDB.org. That’s when I found out there was also a novel by the same title, and it was based on three stories:

My first inclination was to order a copy of the novel. I was anxious to keep reading to find out what happens. It is currently in print but sold as three separate ebooks for $3.99 each, reprinting the individual stories. I really wanted a copy of the original Doubleday edition because of its dust jacket. A first edition can run in the hundreds, but book club editions aren’t too expensive. However, I have the magazines and decided to just read the story in its original serial form.

I’m not sure Anthony Boucher and J. Francis McComas knew what they had with the first story because it wasn’t given cover like parts two and three. “One in Three Hundred” was mentioned on the cover, but it was listed last. However, they introduced the story with: 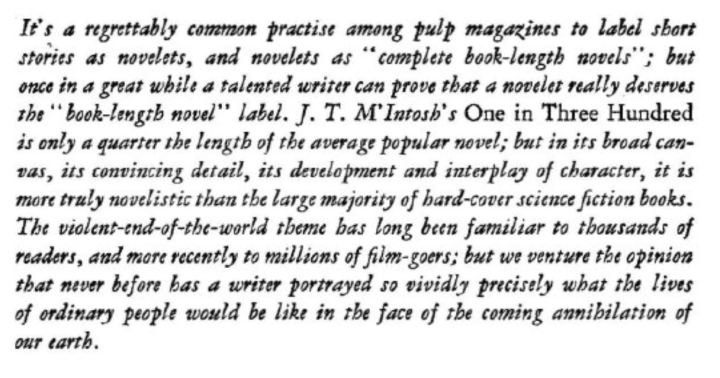 The story begins with 28-year-old Bill Easson walking around the small town of Simsville, (population 3,261) oddly judging people in his thoughts. What slowly unfolds is the world will end soon and Bill will pilot one of 700,000 cheaply built rockets that can each take ten passengers to Mars. Only 1 in 300 Earthlings will get a chance to survive, and Bill’s job to pick the right people. This story reminds me of a movie I just reviewed, Abandon Ship where Alec Holmes (Tyrone Power) has to choose who lives and dies on a lifeboat.

Bill is very conscientious about his assignment. He doesn’t want the obvious morally best people, but people he thinks are up to the challenge and one who could make something out of their new life on Mars. Of course, most people in this town try to con, barter or force themselves onto his list. It’s a compelling story, and fairly adult for a genre targetted to youths. Most of the story is about Bill’s logic, and how he argues with different people who can’t see his way of thinking.

We eventually learn what the editors thought of the story in their introduction to the second part, “One in a Thousand.” 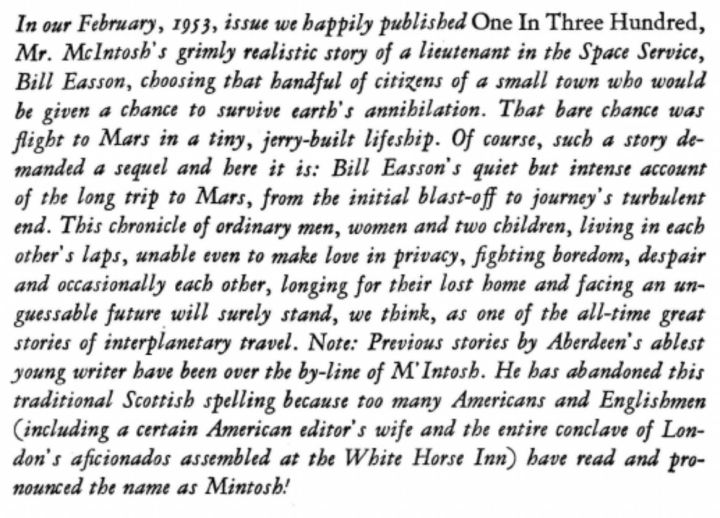 I hope it’s not too much of a spoiler to learn that Bill and the ten do make it off Earth because the second episode is about surviving the journey in space. And the editor’s lets you know about as much as you need to know. I like the second part, but it wasn’t as original as the first story. However, McIntosh does provide some very realistic problems for his characters so solve, much more real than most space adventures of the time. 1954 was pre-NASA and although McIntosh doesn’t lay a bunch of technical jargon on us, he does cover all the scientific basics for traveling to Mars. Most science fiction at the time, or even later, seldom bother with these kinds of details.

Again, this might be a spoiler, but it’s probably obvious that in the third installment, they do make it to Mars but face a whole host of new survival problems colonizing Mars. By now the editors know how big of a hit they have.

One in Three Hundred is a forgotten novel of science fiction. It appears to have made a minor splash at the time. Groff Conklin said it was “A distinguished tale” in his January 1955 review in Galaxy. But it was the last book he reviewed in that column and didn’t say much other than describing the three parts like I have above.

On the other hand, Damon Knight savages the story in the February 1955 issue of Science Fiction Quarterly. Who is right, Boucher and McComas and the readers of F&SF, or Damon Knight, who became one of the first literary critics of the genre? Knight makes me feel stupid for liking the story. 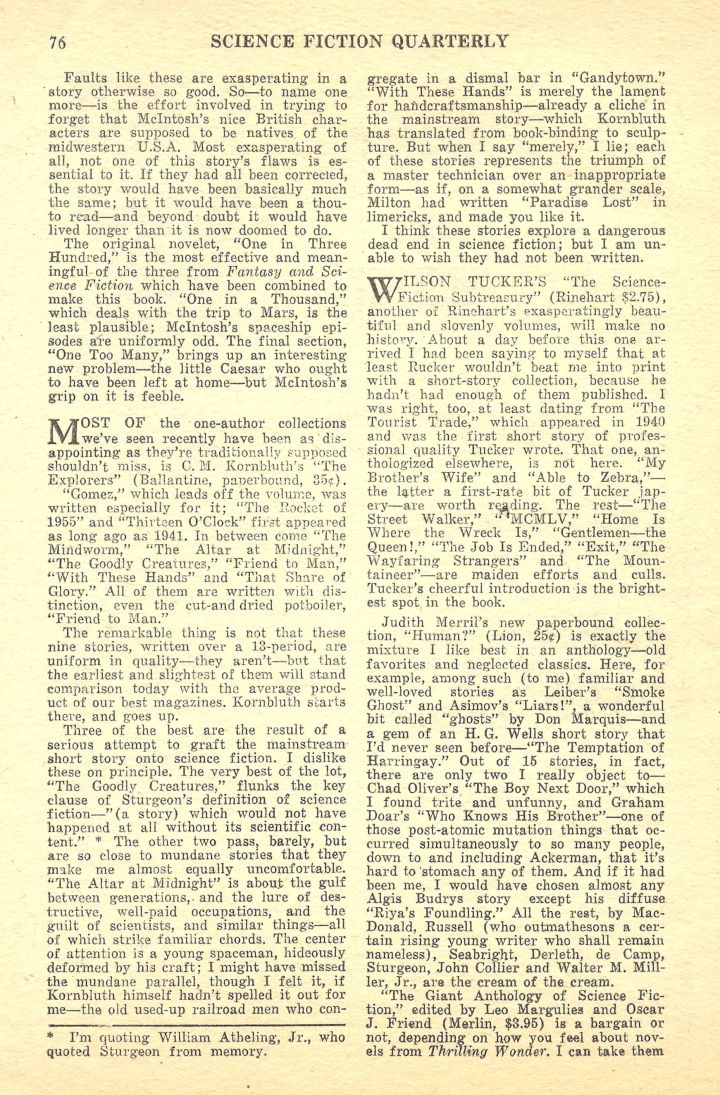 And Henry Hull in his review from Imagination April 1955 makes me wonder how could  have I liked the story at all:

Galaxy reviews the One in a Hundred again when it was republished as an Ace Double. This time Floyd C. Gale calls it excellent and compares it to When Worlds Collide. 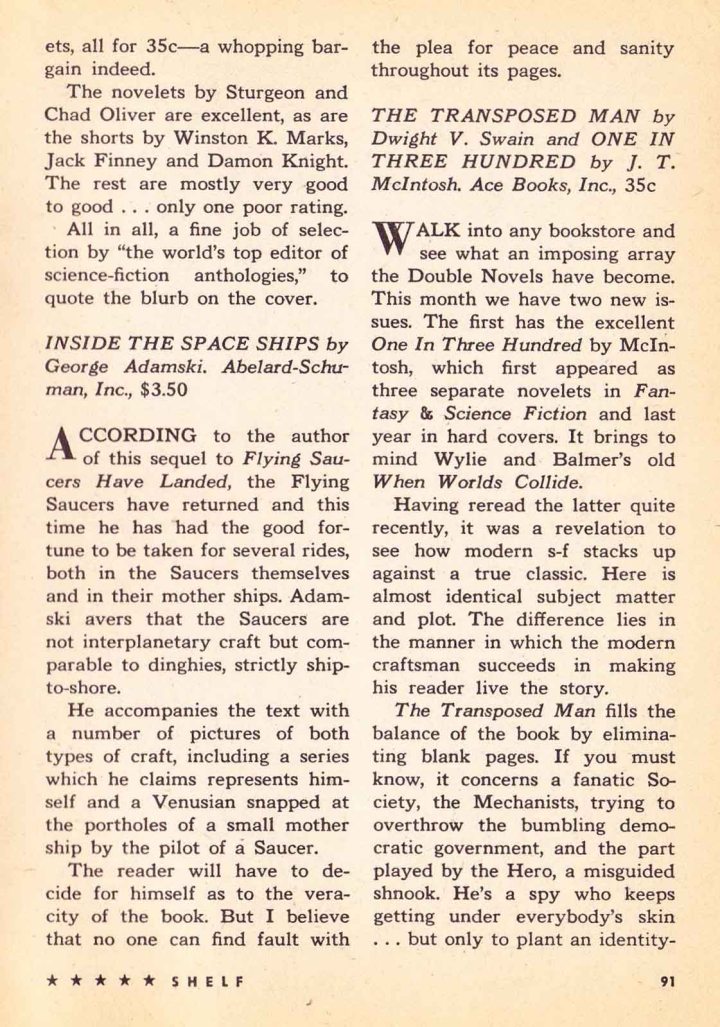 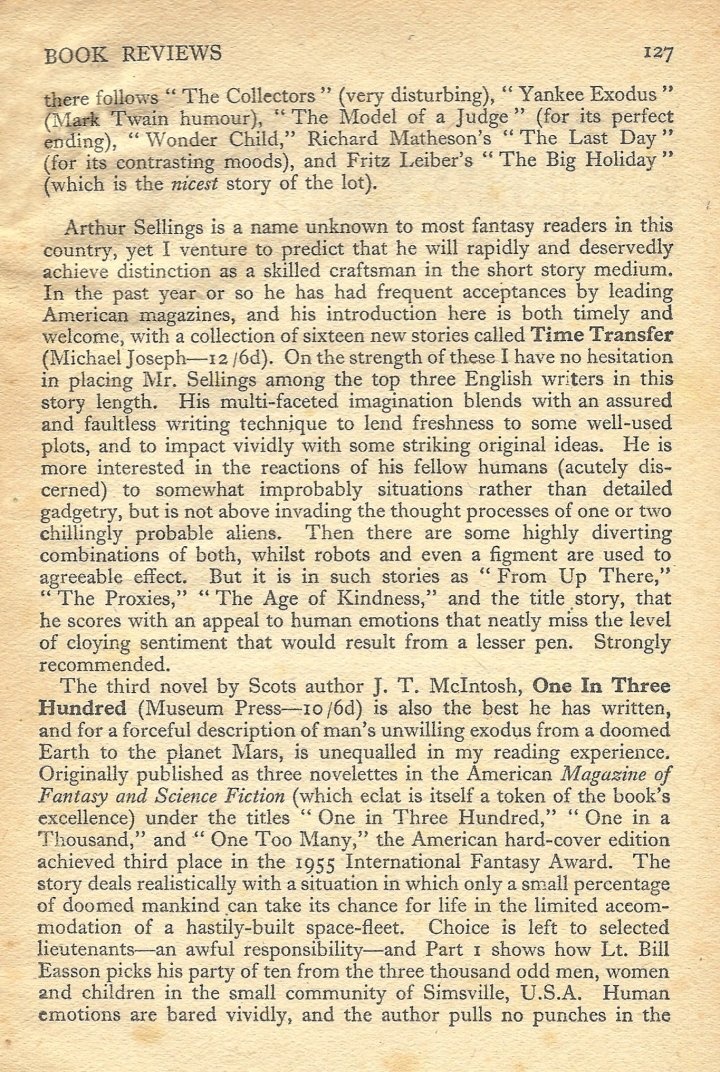 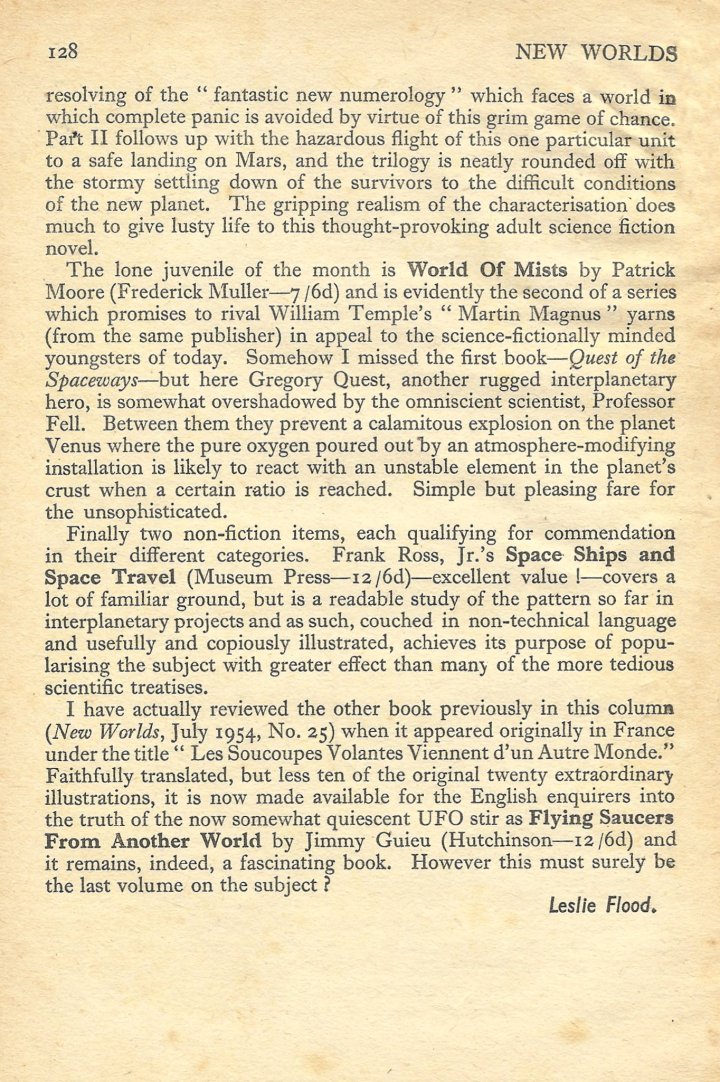 I have to admit that One in Three Hundred isn’t a great book, but I find it fun reading. But then, I love discovering old forgotten science fiction worth remembering. I’m mining the past for the kind of science fiction I enjoy — the ones I missed the first time around. Of course, that means anything I like and recommend must be taken with a grain of salt if you’re only used to reading modern science fiction.

I recently read The Death of Grass by John Christopher from the same time period and will say it is a classic, a true novel of artistic quality, one a modern reader should admire. McIntosh doesn’t come close to Christopher’s writing skills. However, does that mean I shouldn’t recommend One in Three Hundred? Damon Knight was famous for vivisecting SF novels, and he does make this novel seem silly — but I could do that to all my favorite books. Sure, it is unrealistic to believe that we’d ever build 700,000 cheap spaceships. I doubt McIntosh believed it either. McIntosh sat down to write about one man picking ten people to survive the apocalypse. That’s the primary hook. The second and third parts are about how well he chose.

Of course, McIntosh gets everything wrong about Mars, but then so does all the other science fiction writers of that time, including Heinlein, Clarke, and Asimov. I remember seeing the name J. T. McIntosh on books when I was growing up, but they never appealed enough to me to buy and read them. Now I wish I had. I assumed he was among the countless hack writers of genre and that might be what he eventually became. However, it appears his early books from the 1950s were more promising. Some of his books are in print today as ebooks, but I don’t know if they are his best work or hack work. If we have any J. T. McIntosh fans out there who can vouch for his better novels, leave a comment.

3 thoughts on “One in Three Hundred by J. T. McIntosh”