In this short 1949 science fiction novel, Keith Winton, the editor of pulp science fiction magazine Surprising Stories is on a weekend retreat at his publisher’s estate in the Catskills. He has fallen for Betty Hadley, the editor of Romantic Stories. Keith woos her to stay, but Betty has to get back to New York City. Keith stays, first going back to his room to edit the letter column for his next issue, but then going out to sit in the garden, hoping to see an experimental rocket hit the moon with flash that can be seen from the Earth. It is 1952, but not our 1952. Instead of impacting the moon, the rocket crashes onto the Catskill estate sending Keith Winton into another universe.

I don’t want to tell you too much about this other universe — there’s too much fun to spoil. Keith’s new reality is much like ours in every way, but their concept of science fiction is quite different. What Mad Universe is a cross between a nail-biting pulp thriller and a wild satire of science fiction and its fans.

If you love pulp fiction, you should love this story, especially if you’re an aficionado of 1950s Sci-Fi, and I am in a big way. This novel has often been reprinted, yet it’s not well known. I listened to the audiobook narrated by Jim Roberts (6 hours 48 minutes). It took me a bit to get used to the style, but I could never tell if the slight oddness was Brown’s or Robert’s. In the end, it didn’t matter, the audiobook made this story even better.

The story prefigures the work of both Philip K. Dick and Robert Sheckley. And if you know what recursive science fiction is, then that’s another tipple in its favor.

If you need to know more details, there’s an extensive synopsis on Wikipedia, but it’s full of spoilers. If you want to sample the story, you can read the novella version online from the September 1948 issue of Startling Stories (it’s severely cut down). There is a $2.99 Kindle version at Amazon, but if you think you want a whole lot of Fredric Brown What Mad Universe is also available with four other of Brown’s science fiction novels in the NESFA hardback collection Martians and Madness — the other stories are Martians, Go Home (1955), The Lights in the Sky Are Stars (1953), The Mind Thing (1961) and Rogue in Space (1957). 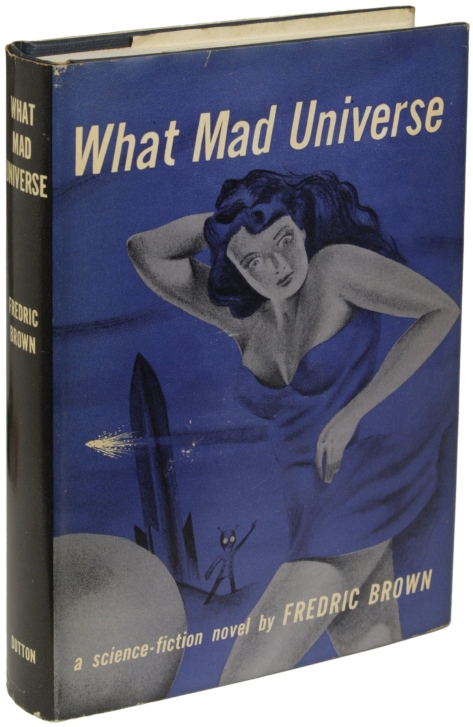 3 thoughts on “What Mad Universe by Fredric Brown”