Let’s try to imagine what the average person thought about space travel in 1947 when “Centaurus II” first appeared in the June issue of Astounding Science Fiction. It’s author, A. E. van Vogt was one of the top science fiction writers of that day. The term science fiction wasn’t wildly known in the 1940s, and only a microscopic portion of the population read it. Science fiction had a small place in the funny papers, comics, radio, and movie serials, but the average American thought of space travel as that “Crazy Buck Rogers stuff.” And if you’ve ever seen a Buck Rogers or Flash Gordon serial you’d know most people would have thought it pretty damn silly. Science fiction was not taken seriously, and older fans talked about hiding their science fiction magazines so no one would see them.

By 1947, most people knew about the V-2 rockets launched against London during the war. A few might have known about the American rocket scientist Robert Goddard and the captured German rocket scientist Werner von Braun. It was still years before popular magazines in the 1950s would present plans to travel to the Moon and Mars for the general public to consider, and another decade before Sputnik and the creation of NASA.

For the most part, it was only the Astounding Science Fiction readers who really believed in the final frontier. The other science fiction magazines of the 1940s published mostly space fantasies for teenage males, on par with Buck Rogers and the comics. They were 100% fantasy and 0% scientific. John W. Campbell Jr. and some of his writers were true believers in space exploration. Campbell wanted his writers to imagine realistic possibilities, and in that sense, “Centaurus II” is a worthy consideration.

“Centaurus II” is much more realistic and I wonder why? Did the atomic bombs and V-2s sober van Vogt up to consider interstellar travel without the fantastic super-science of older science fiction? Every story has to have conflict and most of the conflicts in the generation ship stories we’ve been discussing involve fantastic plot twists. “Centaurus II” stays down-to-Earth all the way to the stars.

Here’s our reading list with links to the stories we’ve read so far:

There have been seven decades and four generations since the 1940s, and science fiction seems to have changed in every decade, and the expectations of the future have changed with each new generation. Readers reading “Centaurus II” today will probably feel it as silly as an old Buck Rogers serial, but if you squint at this story just right, you’ll realize that van Vogt took his speculative fiction deadly seriously.

One of the benefits of focusing our reading on a single theme is discovering how a science-fictional theme evolves and changes. “Universe” from Robert A. Heinlein in 1941, which we haven’t read yet, is probably the most famous generation ship story. In it, the crew forgets the mission and believes the entire universe is the ship. Van Vogt has his crew always remember the mission, and the plot conflict is about how the captaincy is passed on.

Van Vogt does something else that’s very realistic. His ship arrives at star after star only to discover their planets are either uninhabitable or occupied. Each captain must ruthlessly push on against mutineers who want to return to Earth. In nearly all the generation ship stories we’ve read, those born in transit often rebel against their predefined role in life. They can’t understand why they weren’t born on Earth, an obvious place for humans, and they resent their crew assignments.

Generation ship stories written in the last decade would have crews knowing their planetary conditions because of our growing knowledge of exoplanets. Science fiction writers in the 2020s will probably imagine a future where all the nearby planets are well studied, maybe even by early robotic probes, before sending a generation ship to visit them. When I was growing up in the 1960s we never imagined we could detect exoplanets, so science fiction still pictured space explorers only learning about distant solar systems after they arrived.

In “Centaurus II” van Vogt has crew work positions handed down from father to son, this creates several of the story’s conflicts. Sadly, van Vogt wasn’t visionary enough to imagine women having significant roles in a starship. I didn’t understand why the jobs weren’t shared. Wouldn’t it be wise if everyone knew something about every shipboard task in case something happens to any of the crew? Plus, they had all the time in the world to learn stuff. By the 1950s John Brunner imagined a woman in command of the generation ship, and women crew members having equal opportunity. It’s a shame van Vogt couldn’t imagine generation ships with more enlightened gender roles and class structures.

What I really liked about “Centaurus II” are the first contacts. Van Vogt imagines alien aliens, with the human explorers barely comprehending their close encounters. In system after system, the crew finds exotic planetary environments unsuitable for human habitation, and sometimes those unearthly worlds produce weird aliens. But their captains don’t make first contacts like Kirk or Picard who open a channel and immediately converses with strange new life forms. Van Vogt has his humans meet up aliens only at a distance without using language. This made me imagine European explorers dealing with Native Americans for the first time.

Another interesting aspect of van Vogt’s story is it doesn’t involve a Prime Directive. But in all the cases the humans worried the aliens were the British and they were the Australian aborigines. In the 1940s van Vogt, Heinlein, and other science fiction writers often feared running into advanced aliens. In Heinlein’s first interstellar novel, Methuselah’s Children, he has his humans encountering aliens so advanced that meeting them in person drove men insane. His ship turned around to run back to Earth with its tail tuck between its fins. Editor John W. Campbell didn’t like the idea of superior aliens, so by the 1950s humans were running all over the galaxy and winning all their king-of-the-hill fights. Heinlein started claiming Homo sapiens were the toughest species in the galaxy, but just a decade earlier he wasn’t so cocky.

It’s interesting how for a while in the 1940s science fiction writers did consider we’d meet aliens that outclassed us intellectually. It’s also interesting that the UFO fad started in the late 1940s. The public, for the most part, wasn’t thinking about humans going to the stars, but a growing number of Earthlings feared being invaded from space. And quite often they thought the aliens would have godlike powers.

Science fiction has always been an inconsequential form of entertainment that sometimes took itself seriously. Would we have ever gone to the Moon if science fiction had not existed? That’s hard to say. The concept of generation spaceships was invented by scientists in the 1920s who read Jules Verne. So which came first, science fiction or science?

For most of my life, I believed we could build a generation ship if we tried. Obviously, van Vogt and all the later science fiction writers believed that too. With every science fiction story, a different consideration about generation ships was considered. However, in 2020 I’m having my doubts. Collectively, we lack the will to get to Mars. No one wants to pony up the money. Sure, Elon Musk claims he will, and I hope he succeeds, but I have my doubts. And I’m not sure going to Mars is the right next step.

How many rockets did it take to build the International Space Station? Certainly, a generation ship would have to be at least a 1,000 times more complex, maybe even a 1,000,000 times. Launching all those rockets from Earth won’t be practical. To me, the only practical solution for building a space-faring economy is to create a self-sustaining colony on the Moon. The Moon should become the shipyards for spaceships.

All the generation ship stories we read so far suggest that Earth built them. In 2020, I’m trying to think ahead like van Vogt did in 1947. I assume in the next 30 years we’ll have Earth and spaced based telescopes that will discover all the nearby planets, and we’ll be able to analyze their atmospheres. Any generation ship we send out will know a whole lot about its destination before it even launches. That solves half the fictional problems van Vogt imagines. I also assume we’ll send probes ahead of human crewed missions. It’s funny, but science fiction never spent much time speculating on unmanned probes and satellites.

In 2020 I assume future interplanetary and interstellar probes would contain AI minds or AI robots. Because of such speculation, the need for generation ships dwindles. We’re now seeing science fiction stories that imagine robotic probes that build humans from DNA printers when they reach a suitable destination. That would also invalidate the need for generation ships. However, I don’t know if such DNA printers are really possible. Science fiction has a habit of inventing super-science technology that turns out to be fantasy, like FTL spaceships.

Anyone writing science fiction in the 2020s should consider the fate of van Vogt’s story in light of seventy years of real science. Why didn’t science fiction writers in the 1940s imagine giant telescopes? Or women’s equality? Or the breakdown of social classes. In all the generation ship stories we’ve read so far, none of them stay in communication with Earth. Why?

“Centaurus II” has two sequels and all three were combined to create the fix-up novel, Rogue Ship.

I’m looking forward to reading generation ship stories from the 1970s, 1980s, 1990s, 2000s, and 2010s. I’m hoping for some real surprises. To read our past reviews see Generation Ships in Science Fiction. 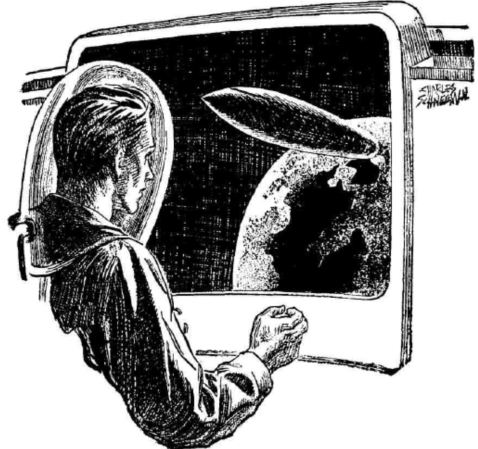