“In Hiding” originally appeared in the November 1948 issue of Astounding Science-Fiction. You can read it online at the Internet Archive. You can also find this story in these books, which include:

I just finished listening to the new audiobook edition of The Science Fiction Hall of Fame Volume 2B. “In Hiding” turned out to be my favorite story in the collection. I don’t think I’ve read it before, although it feels vaguely familiar. And I had no memory of ever encountering the author, Wilmar H. Shiras, before. It turns out Wilmar was a woman, making her only the third woman writer in the first three volumes of The Science Fiction Hall of Fame.

“In Hiding” is a quiet story about a boy who is so smart that he has to hide his intelligence from other kids and grown-ups. I thought it a remarkable story, and so did the readers of Astounding Science-Fiction back in November 1948. “In Hiding” scored first place in “The Analytical Laboratory,” with an average score of 1.54, meaning most readers put it at the top of their list. That doesn’t happen often. John W. Campbell, the editor had this to say:

Shiras wrote two more stories for Campbell, “Opening Doors” (March 1949) and “New Foundations” (March 1950). In 1953 Shiras came out with Children of the Atom from Gnome Press by including the three Astounding stories and writing two more to create a collection. Although this book has been reprinted many times over the years, it’s not well-known, and Wilmar H. Shiras only wrote a handful of other stories, including three for Ted White’s Fantastic in the early 1970s. It’s a shame that Campbell was wrong about her, and she didn’t become a major science fiction writer. Wikipedia has damn little about Shiras. She got married at 18, had two boys and three girls. Children of the Atom is the main reason she is remembered, and only by a few old fans. 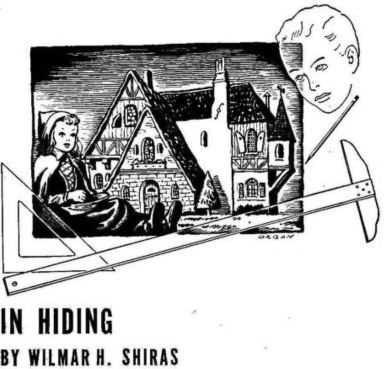 I found “In Hiding” to be a philosophically insightful science fiction story because of how Shiras dealt with the human mutant theme. There are some who claim (without documentation) that Children of the Atom inspired Stan Lee and Jack Kirby to create X-men comics. After the atomic bomb in 1945, radiation was used for all kinds of miracle mutations in comics, pulps, books, television shows, and movies. Radiation caused insects to grow as big as dinosaurs and for people to develop superpowers. Shiras took a quieter approach. Parents working at an atomic plant conceived mutant children with very high IQs. Normal looking, but very smart. I found that much more appealing than silly stories of oddities with superpowers.

I don’t know why, but science fiction has a long history of imagining Humans 2.0, and they invariably give our replacements telepathy and other psychic powers. I just don’t see that happening. Psi-powers are obviously borrowed from stories of gods, angels, and other magical beings in myths. Isn’t prayer telepathy with God? Don’t angels and demons teleport? Aren’t god-like beings always using telekinesis to act powerfully? I find it psychologically lame that SF writers assume evolution will lead to such talents. Superpowers appeal to the child in us. We want reality to be magical — it’s not.

Shiras takes a different approach, one I feel is more adult. Radiation can cause mutations. Sadly, most would be unwanted physical changes. But, Shiras suggests just a bump in smarts. Not god-like super-knowledge, but children smarter than average. In her stories, it’s implied the orphan children of the atomic plant workers have IQs greater than 150. They are orphans because the plant blows up.

“In Hiding” is about Tim, a boy a school psychologist discovers is a lot smarter than his B average grades imply. Over time the psychologist gains the confidence of the boy and learns Tim pretends to be a normal kid because he discovered at a very early age that other people, young or old, resents intelligence greater than theirs. Tim hides. He is raised by his grandparents who expect him to be well-behaved and quiet, and when he is, allows Tim to have privacy and a workshop in an old barn. By using the mail, and pseudonyms, Tim creates secret personalities that pursue various hobbies, conducts science experiments, breeds cats, completes college correspondence courses, sells stories to magazines, and writes articles for journals.

Science fiction has speculated about Homo superior or superior aliens since the 19th century. Almost always they imagine big heads and ESP. I think evolution is obviously working towards increased intelligence and self-awareness. I believe AI machines will be the next rung on the evolutionary ladder, but I also assume it is possible humans could undergo mutations that will lead to a new and improved biological species. But what is better? Marvel Comics mutants appeal to the child in us. What improvements would rational adults hope for? What new species of humans would have better adaptations for our current reality?

I’d say a species that is smart enough to live in cooperation with nature, one that doesn’t cause endless wars, mass extinctions and poisons the ecosystem. Science fiction and comic books can’t seem to conceive of that. If Wilmar H. Shiras had continued with her series, she might have. Science fiction shines at imagining dystopias but fails at speculating about utopias. Billions plan to go to heaven, but the most complete description of heaven in The Bible sounds like hell to me.

It’s sadly ironic, but Wilmar H. Shiras has been in hiding all these years.

p.s. I found the picture of Children of the Atom on Google. Later I ordered the book from ABEbooks.com – and ended up with that exact copy.

2 thoughts on ““In Hiding” by Wilmar H. Shiras”