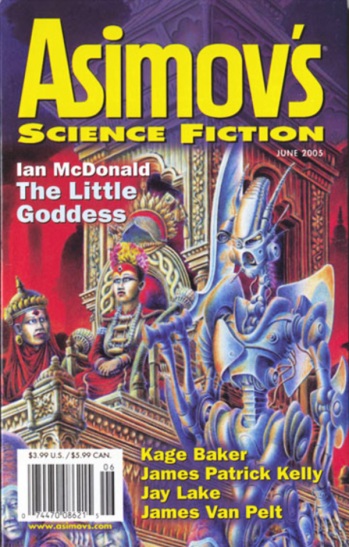 When I started reviewing the stories in The Very Best of the Best one at a time, I only had a vague idea of why. I thought it would teach me about reviewing short stories, but I also thought it would teach me about the current state of writing science fiction. I’ve wanted to write science fiction ever since I started reading it in the 1960s. I took a creative writing class in high school, and then later took more classes in college. In 2002, when I was 51, I got up the money and used six weeks of saved vacation time to attend Clarion West. I wrote a lot of bad stories and read stacks of stories by other would-be writers. I could sense the difference between a professional story and an amateur effort, but I couldn’t define those differences or recreate them.

Last year I started binging on classic science fiction short stories. At the beginning of this year, I started binging science fiction stories from current science fiction magazines. I’m still struggling to discern what makes a good story. I’ve finished reading four stories so far in The Very Best of the Best and it’s obvious they’re magnitudes better than the average story I’m reading in Asimov’s, Analog, F&SF, Lightspeed, and Clarkesworld. And those stories are magnitudes better than the stories I read in fiction writing workshops.

Back in Clarion West, we were told, I think by John Crowley, “That great writing is the accumulation of significant details.” And that’s what I see when I compare workshop stories, average published stories, classic SF, and the stories in this anthology. The four stories I’ve read so far are dense with significant details. By the way, Gardner Dozois was one of our weekly instructors as Clarion West in 2002. I wish I could remember everything he said. Now his last anthology is going to be my new writing workshop. I figure it will take me six weeks to finish this project, about the length of my stay at Clarion West.

Like the previous story I discussed, “Rogue Farm” by Charles Stross, Ian McDonald’s story is also set in the near future where nanotechnology and AI have transformed our societies. “The Little Goddess” blends a disruptive post-cyberpunk future with ancient and modern cultures of India. In our current era of cultural appropriation brouhahas, I have to wonder why McDonald chose India for his science fictional setting. The story is a wonderful clash of modern dazzle-tech and ancient exotica, as its characters struggle to preserve modern myths in times of rampant future shock.

In 2019 I’m reading a British man’s 2005 view of future India. I could be reading writers from India imagining their own future. Of course, any anyone writing historical fiction would have to do the same kind of research to tell a story set in another culture. As an old guy (67) who grew up loving 1950s and 1960s science fiction, I’ve seen the genre go through many transformations. I can’t help but feel that recent decades are a baroque period where stories get longer and more ornamented with extra details. Back in the 1960s, Roger Zelazny started writing science fiction stories set in other cultures. Over the decades, science fiction has slowly become less Amerian-British. Anglo-American writers began setting their stories around the world, while concurrently and rather slowly science fiction writers from around the world have begun sending us their SF stories. What we’re learning is every country has writers thinking about the future, as well as writers who want to use their cultural heritage to flavor science fiction stories.

What it comes down to is science fiction is diversifying culturally yet still tells the same kind of stories. In every country, writers see their society being transformed by technology. We’re all rushing into a future that looks optimistic and depressing at the same time. Nearly all science fiction writers working the near future territory see AI, nanotechnology, networks, Big Data, robots, genetic engineering, computers, 3D printing, GPS, smartphones, etc. chewing up the social landscape. 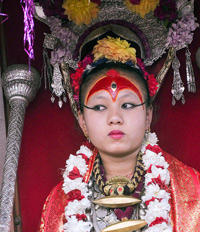 The question I keep asking is: Are these science fiction stories prophetic? For example, in “The Little Goddess” our first-person narrator, who begins the story by becoming a Kumari, at another point becomes a mule for AI smugglers. They embed tiny AI in her head, so while she’s smuggling the AI she experiences being a part of multiple minds. Is this just a razzle-dazzle futuristic fantasy thriller, or should we expect that kind of technology sometime soon? 2047 is only 28 years away, which is only as far as 1991 in our past. What science fiction writers like Ian McDonald and Charles Stross are trying to do is gauge the amount of future change by the amount of change we’ve already experienced. I’m old enough to remember 28 years times 2, which would be 1963, and I can readily confirm I’ve experienced a great deal of future shock in my life.

Science fiction does not have to be scientifically accurate, or possible, but that is something I do admire in science fiction. What always comes first is storytelling. And in these stories in The Very Best of the Best, the storytelling is excellent. Gardner Dozois should know, he’s read many thousands of stories. In the 35 years, he anthologized over a thousand stories just for his annual best-of anthology series. And the best of those best were distilled down into three anthologies, which The Very Best of the Best is the last.

“The Little Goddess” is one of 38 stories that Gardner Dozois thought were the best short science fiction to be published from 2002 to 2017. Anyone who wants to write science fiction should read The Very Best of the Best. What I’m doing in these reviews, is trying to figure out how I could write such science fiction too.

Why does Ian McDonald begin his science fiction story by choosing a prepubescent girl who has been chosen to be a goddess in an obscure sect in India? That sounds like the beginning of a fantasy tale. Why does Eleanor Arnason create a fur-covered alien living in a primitive homosexual society on a distant world for her main character in “The Potter of Bones” or Charles Stross create an antagonist in “Rogue Farm” that’s a roving farm made from eight post-humans? Is the key to a classic SF story a highly unique character? “The Little Goddess” is a long story, a novella, and it doesn’t have much of a plot. It’s all detailed texture. This was also true for “The Potter of Bones.”

I am both reading and listening to these stories. I believe great writing shines when heard aloud read by a great narrator. I wish you could hear:

I’m not sure if I could ever imagine all those details. Vivienne Leheny who reads the audio for this story conveys these words in a way my mind could never read on its own. By hearing these words read while looking at them on my iPad screen I realize both the personal details I’d have to invent and the voice of the character I’d have to create. This is a daunting challenge. McDonald keeps this up for over two hours, the length of a movie.

Reviewing the first two stories showed me the value of world-building in writing a science fiction story. “The Little Goddess” illustrates the value of voice and character. This project is evolving as I write. It’s becoming rewarding in ways I didn’t foresee. I hope I can finish it because it should offer me countless lessons that I can’t imagine at this early stage.

2 thoughts on ““The Little Goddess” by Ian McDonald”