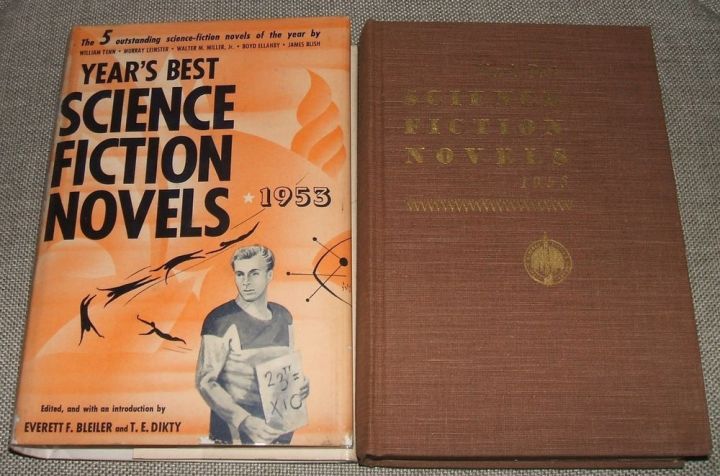 Not only is there little chance of finding a copy of Bleiler and Dikty’s Year’s Best Science-Fiction Novels 1953, but the title is completely deceptive. It contains five novelettes and novellas, not novels, and they were first published in 1952. So why review such a book? Well, the internet will allow fans of old science fiction to still read these stories if they want. The ISFDB link will tell you if you already own an anthology with the story. Or you can read it in the original magazine at the Internet Archive or from Project Gutenberg.

“Firewater” by William Tenn – 4 stars
Businessman, Algernon Hebster, barters for alien technology from humans driven insane by contact with strange Earth invaders. Aliens occupy our planet but merely observe us. We can’t communicate with them, and the people who try, become mystical idiots. Algernon Hebster wants to wheel and deal but if he gets too close could lose his mind too. Internet Archive. ISFDB.

“Category Phoenix” by Boyd Ellanby – 3 stars
Dr. David Wong lives in an oppressive society where privacy is illegal. Wong has developed a medical treatment that could give the dictator overwhelming power, so he works to secretly create a revolution. Internet Archive. ISFDB. Project Gutenberg.

“Surface Tension” by James Blish – 5 stars
Humans crash land on planet Hydrot with no chance of surviving, so they genetically engineer microscopic lifeforms that they hope will have ancestral memory. Wonderfully imaginative. This story has become a classic and is anthologized in The Science Fiction Hall of Fame Volume One. Internet Archive. ISFDB.

“The Gadget Had a Ghost” by Murray Leinster – 4 stars
David Coghlan, a physics professor at the American College, is visited by Lieutenant Ghalil of the Istanbul Police and M. Duval, a French scholar. They ask David if he’s been to the 13th century? It turns out the M. Duval has found a 700-year-old book printed in Byzantine Greek with an ancient annotation handwritten in English with Coghlan’s name and address. It also has inky fingerprints. They test them against Coghlan’s and the fingerprints match. So how did David get to the 13th-century to inscribe the book? A different kind of time travel tale. Internet Archive. ISFDB.

“Conditionally Human” by Walter M. Miller, Jr. – 5 stars
A disturbing story about a future overpopulated Earth where there’s strict control over who can have children. As a substitute people have turned to genetically engineered exotic pets, some of which have been designed to have human-like traits that trigger strong maternalistic and paternalistic emotions in their owners. Terry Norris has been ordered to repossess some of these beloved creatures because they might have unwanted mutations. Internet Archive. ISFDB. Project Gutenberg.

8 thoughts on “Why Review A Book You Can’t Buy?”