When it comes to reading science fiction, I’ve reached an age where nothing new is under the sun. I feel like I’m approaching the weary wisdom of the author of Ecclesiastes when looking over our genre. And today I’m feeling more like Linnaeus and want to classify all the themes of science fiction. This will be a big undertaking that I won’t be finished soon. I’ve attempted this before with “Classifying Science Fictional Ideas.” What I want to do now is decide which approach should I start building the foundation of my tree?

During the past couple of years, I’ve suggested to other science fiction fans that science fiction might have a limited number of themes. Most have not liked the idea — they want our genre to be without limits. But I’m not so sure. It seems to me that science fiction covers specific territories it has claimed over the years. Reading more 19th-century science fiction has shown me we’ve been exploring the same lands for a very long time.

If we borrow from Linnaeus scheme of Life > Domain > Kingdom > Phylum > Class > Order > Family > Genus > Species and replace “Life” with “Science Fiction” what would be the Domains of our genre? I’m currently toying with:

I’m thinking about the smallest to largest objects science fiction explores in speculation and extrapolation. I could also use point of view (POV) as my basic domains and have:

All stories depend on the human perspective even when imagining how aliens and robots think. Should the root domains of science fiction be:

Currently, we divide life into three domains, Bacteria, Archaea, and Eukaryota. Just a few decades ago we only had two domains. So starting science fiction with just two domains might be fine. We need to think about this. How do aliens and robots fit in, for example?

Wouldn’t robots come under extrapolation and aliens speculation? We’re building robots now that are getting smarter and smarter, so it’s no big deal to extrapolate they could eventually become smarter than us. Other than statistics, we have no reason to believe aliens are out there. We can only say, “What if intelligent beings exist on other worlds?”

But what if we ask, “What if robots were ten times smarter than people?” We now have robots under both extrapolation and speculations. Is that problematic? If Machines were a domain we could organize them this way:

But I don’t like that either. What if machines were only inventions and didn’t deal with sentient minds? What if we had a domain for Artificial Beings that included AI machines, as well as artificially created life like in the classic short story “Microcosmic God” by Theodore Sturgeon?

If we think about it, speculation and extrapolation are like mechanisms within nature, such as inheritance and evolution. Linnaeus was actually classifying objects. Science fiction is inspired by objects in the real world such as people, machines, aliens, robots, cities, Earth, moons, planets, stars, galaxies, and objects we assume could exist such as aliens, intelligent machines, artificial life, digital universes, as well as things that probably can’t exist like time machines and time travel.

We could divide science fiction into the domains:

But we’re back into splitting robots into different domains, maybe into all four. Once again, I’m thrown back to my object-oriented classification. For example, take Earth:

I think this works nicely. Each of these could be speculation or extrapolation, or it could be stories based on things happening now or will happen soon, maybe could happen, or even wild speculation like Hothouse by Brian Aldiss that will never happen.

This is my current mindmap: 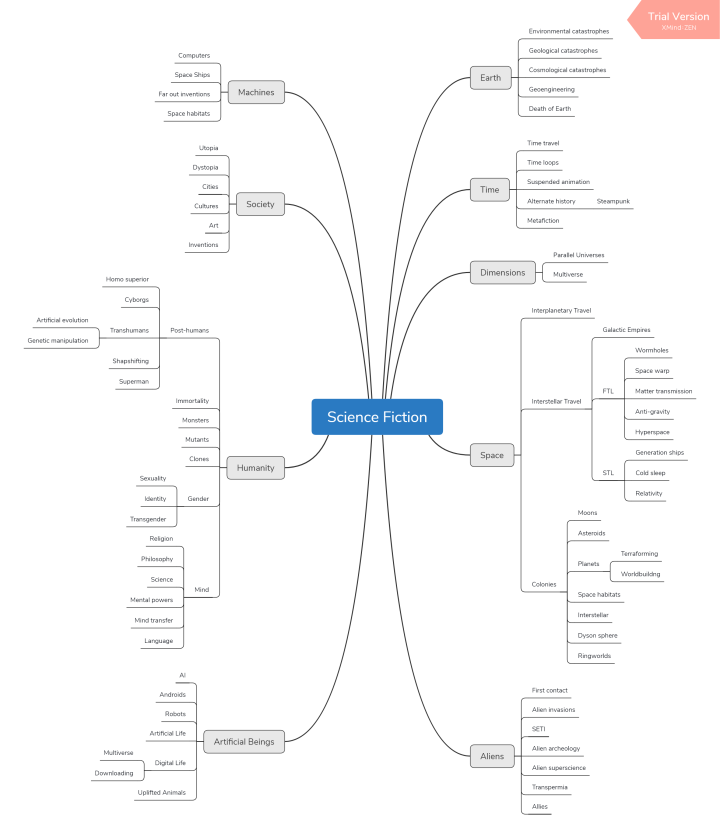 My plan is to read or review old science fiction to see how those stories would fit into the scheme, and grow this tree out with many more leaves.

If you have any ideas about classifying science fiction, please leave a comment below.